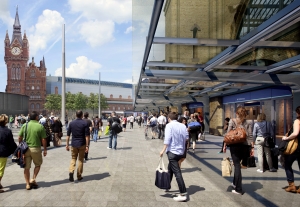 At its meeting on 4 November the Forum heard from architects in the Stanton Williams practice, and experts from Network Rail and Transport for London, about the detailed plans for King’s Cross Square. These plans now form the subject of several planning applications. The discussion is written up fully in the minutes of the meeting.

The plans had changed since the consultation on them in the summer, in which several members of the Forum had participated. Members of the Forum felt that generally the changes were improvements. However, they had several concerns, many of which relate to the piecemeal approach to design in and around the Square: explanations for design decisions often just pass responsibility to someone else. The Forum is responding formally to the planning applications to express these concerns and request co-ordination between the design authorities.

The minutes of the meeting also:

Say what you think Cancel reply