Views of the proposals for Building B6 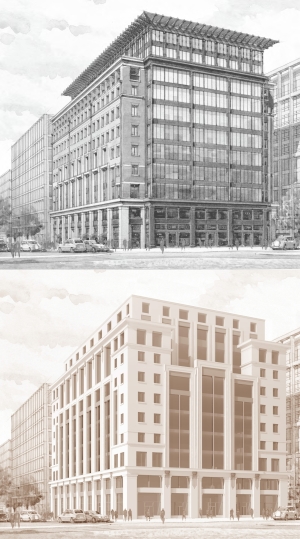 At the meeting on 16 April an architect in the Porphyrios Associates practice told the Forum about the detailed plans for Building B6. This will be one of the six large office blocks around Pancras Square. Only it and Building B5 are still being designed; the others, and the shared substructures, are well on the way to completion.

The earlier plans (for the building in the higher picture alongside) were given planning approval four years ago, but construction did not start. The revised plans (for the building in the lower picture alongside) are quite different. The earlier plans used stone finishes for the first two floors and brick finishes thereafter, with fairly small windows (except where they faced the Regent’s Canal). The revised plans use stone finishes throughout with rather larger windows, and create more vigorous elevations, especially with pavilions towards the Regent’s Canal.

The Forum welcomed the attempt to fit the context provided by the buildings already planned or constructed for Pancras Square, but several members were unenthusiastic about the plans. They thought that the elevations were suited more to an inter-war office block near the River Thames than to a foil for the nineteenth and twenty-first century buildings near the Regent’s Canal. The minutes of the meeting describe the plans and the reasons for the lack of enthusiasm. Of course the plans are not final; they might yet change again before the submission of the planning application.

The meeting also discussed the current work on establishing the primary health care provision in the area. The discussion, outlined in the minutes, will probably be resumed at the next meeting of the Forum, which is from 7:00 to 9:00 on Wednesday 17 September in Committee Room 1 of Camden Town Hall.

This entry was posted in B2, B4 and B6, Central developments, Cubitt Park and Square, Meeting minutes, Neighbourhood planning. Bookmark the permalink.

Say what you think