The new details of the plans for the Google Zone 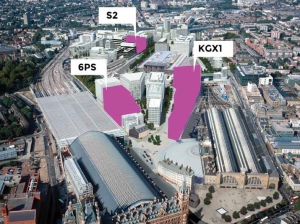 At its meeting on 11 May the Forum heard about the detailed plans for Zone A of King’s Cross Central (along the railway lines to the south of Goods Way). The buildings to be occupied by up to 10,000 Google employees in King’s Cross Central are shown alongside. Aso, Julia Finlayson of Argent described the current proposals for traffic control, Granary Square (or at least Pavilion H) and Keskidee Square (in Zone S).

The plans and proposals are outlined in the minutes of the meeting. The planning application for Zone A (2017/3133/P) has been submitted since the meeting, and the Forum has made a response aligned with the views expressed at the meeting.

This entry was posted in A, Central developments, Meeting minutes. Bookmark the permalink.

Say what you think